Our International Evening, an immersive event dedicated to the celebration of other cultures, has become a regular feature on the school calendar. This year, we focused on Colombia, Tahiti, Jamaica and Indonesia and celebrated their vastly different cultural backgrounds through food, national costume, music, dance, art etc. By 6.00pm on Friday, 21st June 2019, the library was decorated with flags and was teeming with an expectant audience of parents and friends of the school.

Sankofa represented the Republic of Colombia and the girls wore flare skirts with Colombian flag colours and off-shoulder white lace tops. The boys wore black trousers and white shirts with a red scarf and a traditional Colombian hat and leather bag “carriel antiqueno”. On stage, Sankofa shared some interesting facts about Colombia, travelled with a Chiva bus, an artisan rustic bus used in the rural Colombia to carry people and their livestock from place to place, to different regions in Colombia. They went to the tropical beaches in the north and west, the Snow covered volcanoes in the Andes Mountains, the “Ruana” and the Amazon rainforest, home to about 30 million insects, including spiders. They headed back to MKV tired, scared by creepy creatures and missing their mums. They went to performed the “El Caballito” or horse dance and sang “La Vaca Lola” (the cow Lola)!

Nyansapo went on vacation to the islands of Tahiti, the idyllic French Polynesian paradise in the South Pacific archipelago. The children wore coconut bras and hula (long grass) skirts with colourful head dresses made up of flowers. The materials used in these pieces showcase the Tahitian connection to the earth and their land. On stage, Nyansapo showcased Tahitians as the nicest people on earth, a country with iconic views and happy-go-lucky people. They shared some fun facts about Tahiti and touched on the vegetation, white sandy beaches, culture, diet, names and their meanings and gave us a Tahitian edition of “Who wants to be a Millionaire”. Thereafter, they danced the “Tumbere” dance. Gye Nyame Rasfarians wore Rasta pants, black t-shirts, Rasta coloured peace signs around their necks, Rasta arm bracelets and ear-rings. They completed the look with Rasta dreadlocks and caps. On stage, their performance focused on the history, beliefs and facts about Rastafari movement in Jamaica mainly through cultural symbolism and music. 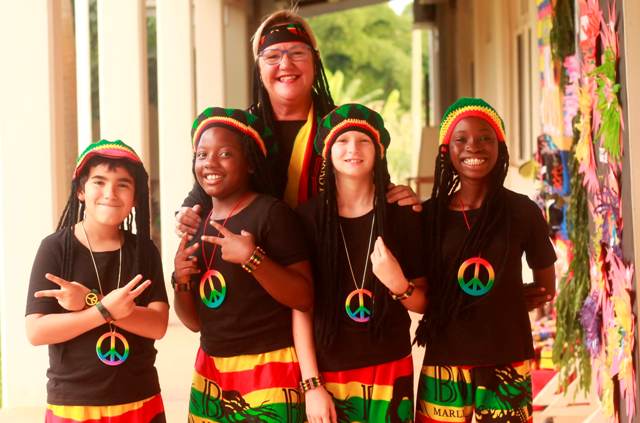 They sang two reggae songs from Bob Marley, a famous adherent of Rastafarianism: “Buffalo Soldier” and “The Three Little Birds”. They traced Bob Marley’s ties to Ghana through Rita Marley and how she had enhanced the area in which she stays, just outside Accra. Two important Rastafarian rituals; Reasoning and use of African Nyabinghi drums. The meaning of the Rastafarian colors of red, green, gold and sometimes black. Rastafarians live “naturally’ and follow the i-tal vegetarian diet, the purpose of which is to maintain a clean and pure body and mind. Nkyinkyim portrayed the beautiful and diverse cultures of Indonesia through the unique traditional attire and designs of different provinces. The girls were dressed in “Kebaya” (semi-transparent blouse adorned with brocade or floral pattern embroidery) with traditional intricately decorated batik sarongs and beautiful head dresses. The boys wore plain white shirts, wrapped their torsos with “Kemben” (torso wrap) and finished off the look with a Balinese “Udeng” hat. On stage, they played the solfas octave “doe a deer a female deer” on the “Anklung”, a Javanese bamboo musical instrument”. The girls treated the audience to some expertly choreographies dance: the girls danced to "Manuk Dadali” which means bird Garuda in the Sundanese language. This song also depicts the valiant of an eagle as Indonesia’s national symbol. The boys also danced the dramatic genre of the horse dance (Jaranan), which is part of an age-old Javanese tradition. Also on display were some Komodo dragons – the biggest lizard in the world. 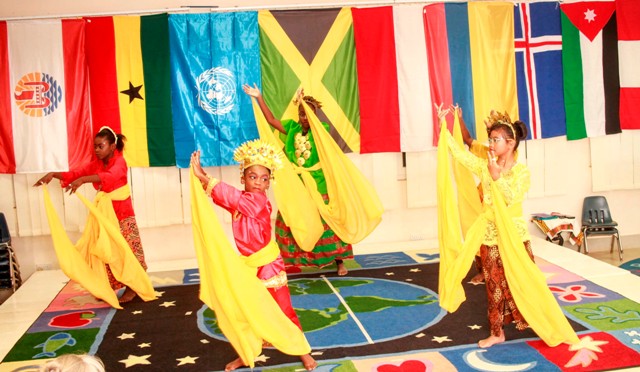 One of the highlights of the night was the breathtaking dances across different countries by the Dance Clubs. There was “Akwaaba” from Ghana, followed by “El Mapalé” from Colombia, “We will rock you” from the UK, “Koala Nutbush” from Australia and “Meisie Meisei” from South Africa. 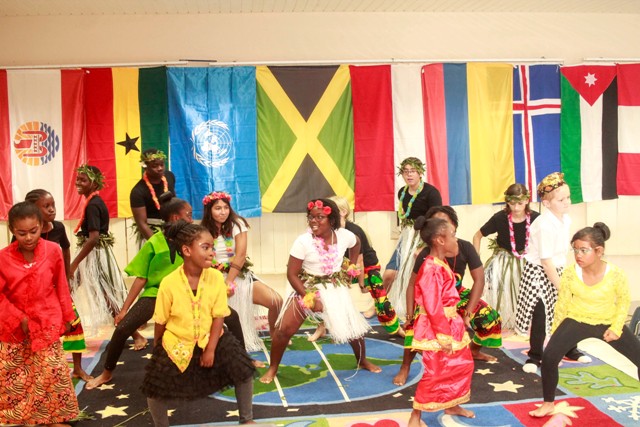 On behalf of all of us at ISA, we would like to sincerely thank those who were involved in the international week in any way.  The International Picnic was a veritable feast for the senses with beautiful displays, sumptuous smells, and fantastic flavours from the countries. The preparation must have taken some considerable time but the results were spectacular and our children (and their teachers) clearly enjoyed their international fare.